In my previous, comprehensive article on problems with the new compact fluorescent blubs (CFLs) Link, I did not include mention of fire danger. This was because everything I read at that time indicated it was rare and occurred only with the first CFLs on the market. Now I find that is not the case. Two emails to me have described recent personal experiences with fires from CFLs. Please note, in the second email, that when the incident was reported to the local fire department, the fireman “wasn't at all surprised and said that it was not an uncommon occurrence” and that “the Fire Marshall had issued reports about the dangers of these bulbs.”
The first email is from a Mr. John Brazell. He wrote: “Two or three weeks ago in a motel suite as I reached to turn on a lamp (and very lightly tapped the bulb in the process) the CFL bulb separated, or had previously separated, from its base just as illustrated below.  Fire and sparks shot out several inches and scared the daylights out of me - a definite fire hazard.  I unplugged the lamp immediately.”
Here is the full text of the second email:

Below is a picture of a CFL light bulb from my bathroom.  I turned it on the other day and then smelled smoke after a few minutes.  Four inch flames were spewing out of the side of the ballast like a blow torch!  I immediately turned off the lights.  But I'm sure it would have caused a fire if I was not right there.  Imagine if the kids had left the lights on as usual when they were not in the room.

I took the bulb to the Fire Department to report the incident.  The Fireman wasn't at all surprised and said that it was not an uncommon occurrence.  Apparently, sometimes when the bulb burns out there is a chance that the ballast can start a fire.  He told me that the Fire Marshall had issued reports about the dangers of these bulbs.

Upon doing some Internet research, it seems that bulbs made by “Globe” in China seem to have the lion's share of problems.  Lots of fires have been blamed on misuse of CFL bulbs, like using them in recessed lighting, pot lights, dimmers or in track lighting.  Mine was installed in a normal light socket. I bought these at Wal-Mart.  I will be removing all the Globe bulbs from my house. 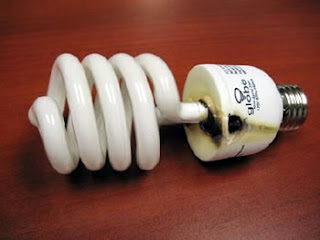 Wal-Mart alone has over 4,300 stores in the U.S. and 4,100 in 14 other countries.  It claims 176 million people visit its stores every week. So they must have sold thousands—maybe tens of thousands—of these problem bulbs already.  Note, too, that while the article says Globe is the manufacturer of the lion's share of the problem bulbs, the problem evidently occurs with other manufacturer, too, though maybe not as much.

Here's another type of problem. Recently I was in a local Ace Hardware store to buy some paint. When I went to the checkout counter with it, there was an elderly gentleman ahead of me who wanted a refund or replacement for a CFL that wasn't working properly. The woman behind the counter said this was her first day on the job and she didn't know how to handle a refund or replacement and would have to get the manager, who was in the back of the store.

While we were waiting for the woman to return with the manager, I said to the man, “It's none of my business, but I'm interested in fluorescent bulbs, and I wonder if you would mind telling me why you are returning this one.” He said, “When you turn it on, only the bottom half of the bulb lights up. You have to wait a minute and a half—sometimes two minutes, but always at least a minute and a half—before the top half of the bulb lights up. My wife likes to read a lot, and she gets very irritated that she has to waste a minute and half for the darn thing to light up so she can read.”

I asked him if he had come to the store solely to return that CFL or if he had other shopping to do. He said he made the trip solely to return the bulb. I've never heard of such trips occurring because of incandescent bulbs, but the cost of the driving and inconvenience of such trips is never included in the claims of all the money you save by buying CFLs. Since the man had no other reason for his trip, the entire cost should have been charged to his cost for CFLs, but he told me he that, even though he had a bad experience, “everyone knows these bulbs save you a lot of money.” I told him the claims of big savings from CFLs were not true, that there were other problems, too, such as false claims about how long they last, damage from ultraviolet light to plastics, fabrics, pictures, and furniture finishes, plus environmental costs and disposal problems. I said if he had a computer, I would tell him were he could read my article on my blog (link) explaining these things. He said he didn't have a computer and never intended to get one.

Finally, there is the news from Germany that consumer protection organizations have demanded suspension of the European Union ban on incandescent light bulbs, citing official tests of danger from CFLs if broken. According to test results released Thursday, December 2, by the Federal Environment Agency (UBA), the mercury levels from broken CFLs are twenty times higher than regulations allow in the surrounding air for five hours after breakage. Jochen Flasbarth, President of UBA, said the phase-out should occur “with safer products that have no avoidable health risks” and called the mercury danger “the Achilles heel” of the energy saving bulbs. Yet the U.S. government claims they are safe and promotes them, trying to show it is better at deciding what is good for people than their own choices in the marketplace.

“It can't be that the state bans a safe product and replaces it with a dangerous one,” said Gerd Billen, the leader of the Federation of German Consumer Organizations (VZVB).

In September the European Union began phasing out incandescent bulbs. The complete phase-out is to occur by 2012.

POSTSCRIPT:  On December 13, one week after posting this blog, I received an email from a man who had installed CFLs in his home about a year ago in order to save money from their much-ballyhooed long lives.  Three of them had already failed far short of their advertised life expectancy.  And on one of them the base had melted and showed evidence of charring.


Also, three other points should be made about John Brazell's experience above. First, notice that breakage of CFLs can occur for a reason other than dropping them; thus dropping them isn't the only way the dangerous mercury can be released. Second, it is likely that whoever cleaned up the broken CFL in the motel was unaware of the proper cleanup procedure and thus did not follow it. If that person vacuumed up the broken glass, the vacuum would have been contaminated, as demonstrated by extensive testing by the Maine Department of Environmental Protection. Therefore, if the vacuum was then used in other motel rooms, it would have created a health hazard to future occupants of all those rooms for many weeks, perhaps even longer. The MDEP found there was no practical way to decontaminate a vacuum cleaner, and the pollution it would emit into a room from subsequent use could be hundreds of times—sometimes thousands of times—greater than the allowable safety limit.  (See link.)  Third, we don't know how the broken bulb in this instance was disposed of, but many jurisdictions prohibit discarding broken or burned out CFLs in regular trash, requiring instead they be taken to a toxic waste site.  They do this to prevent the danger of mercury pollution of land and ground water. Since only about 25 percent of broken or used CFLS are disposed of properly, there is a good chance the CFL in this case was disposed of in an environmentally unsafe manner. And the person responsible would have been breaking the law.
Posted by Edmund Contoski at 12/06/2010 10:55:00 PM

I too have have a CFL burn out and look just like the one in the above picture. It was very hot and smelled like a rectifier when it burns out. I'm a Ham Radio operator and electronic technician so I've seen and smelled many rectifiers burn out. The burn out occured within a couple minutes after turn the light on. I replaced it with an incadesent bulb for my safety.

This post presents clear idea designed for the new visitors
of blogging, that truly how to do running a blog.